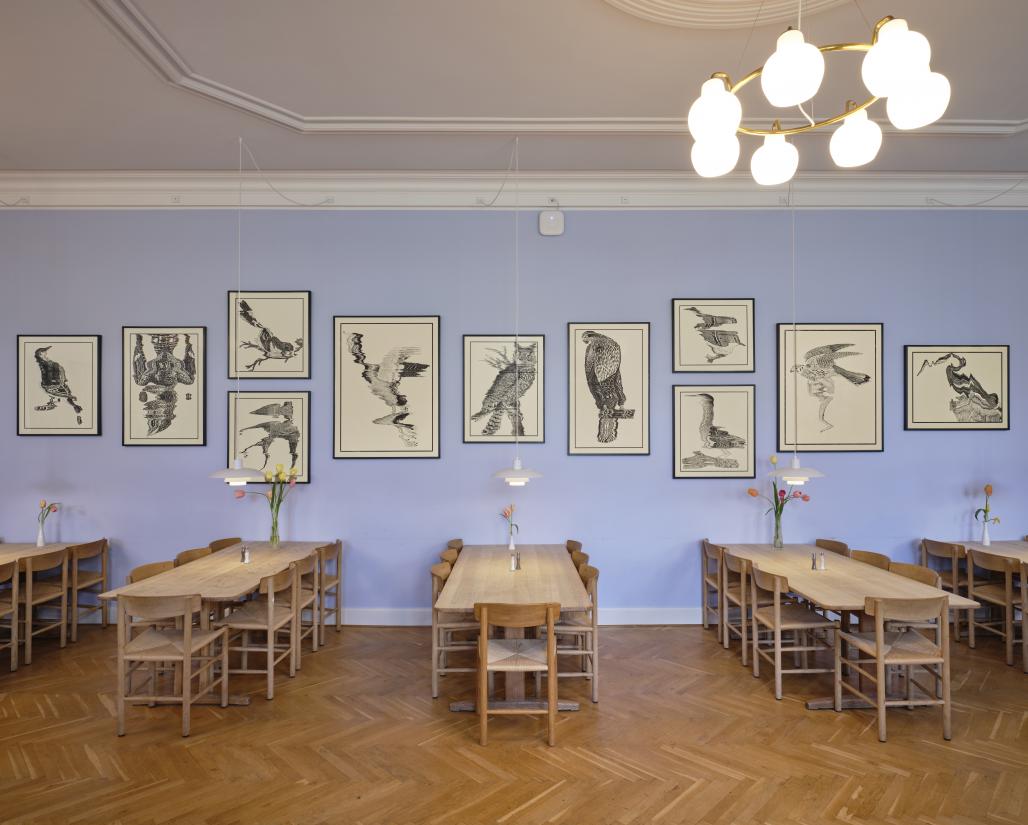 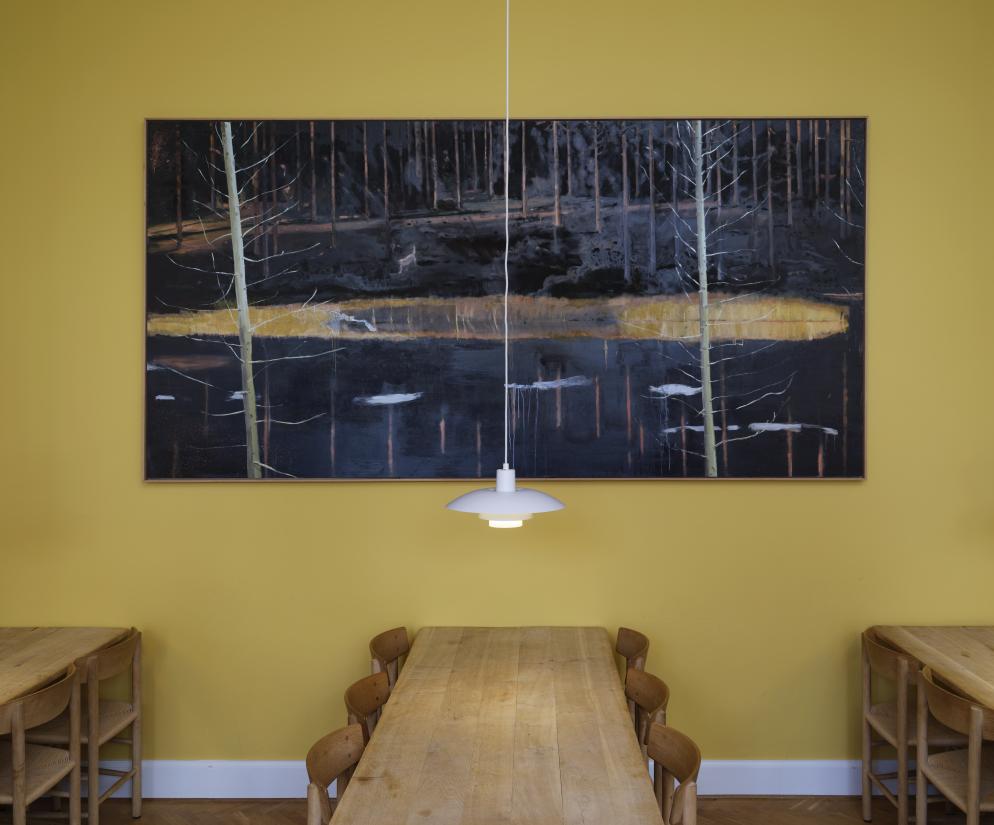 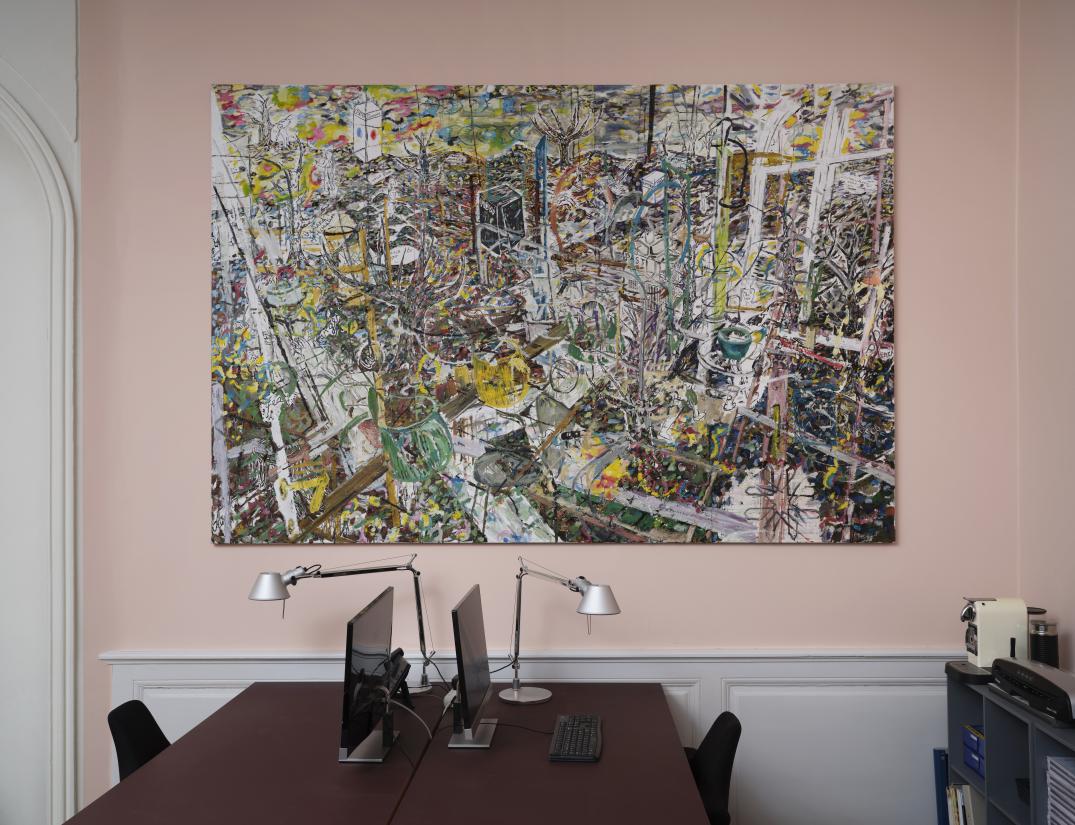 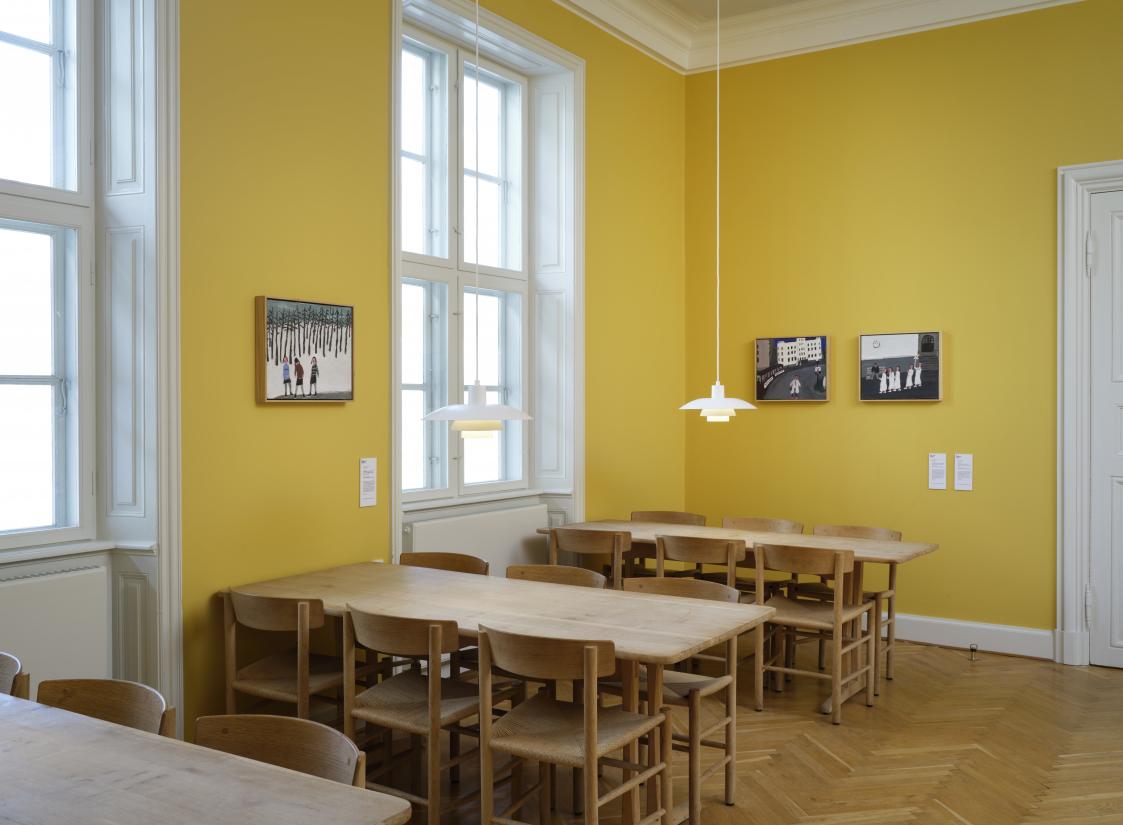 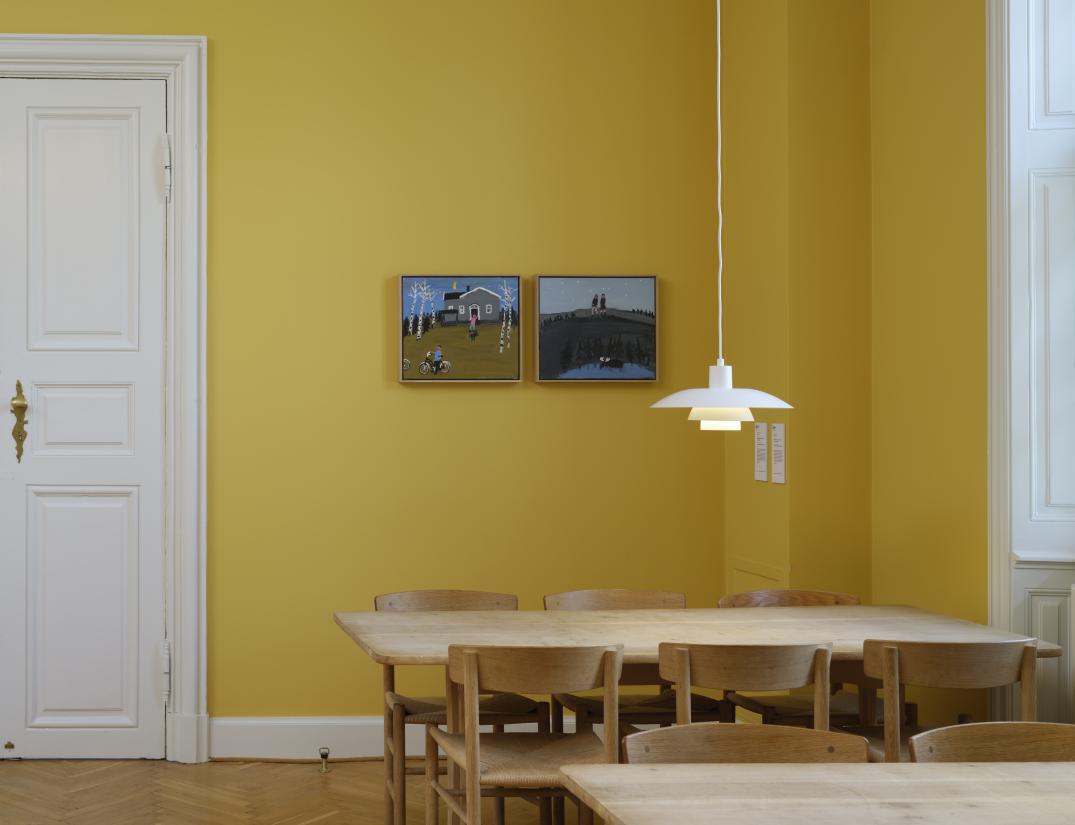 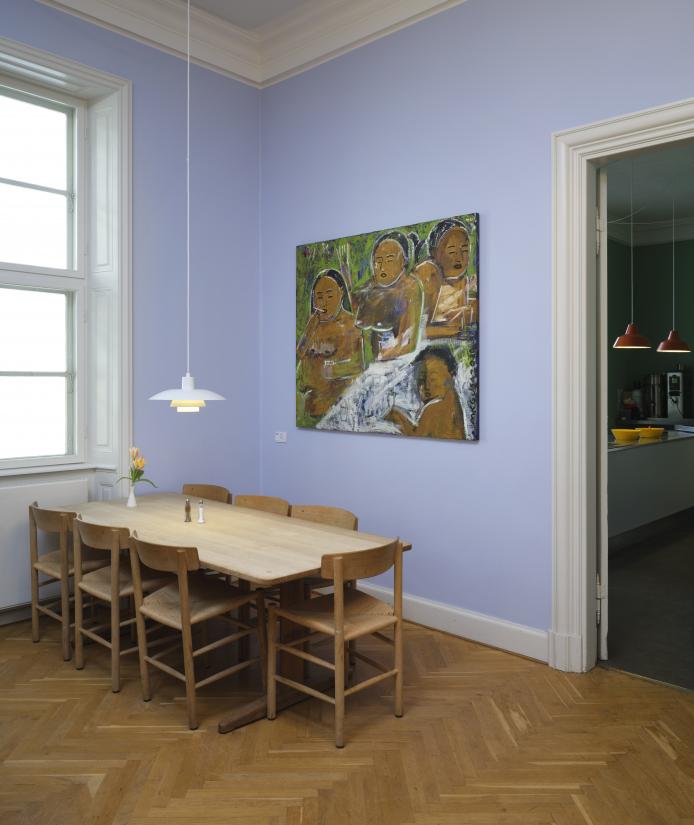 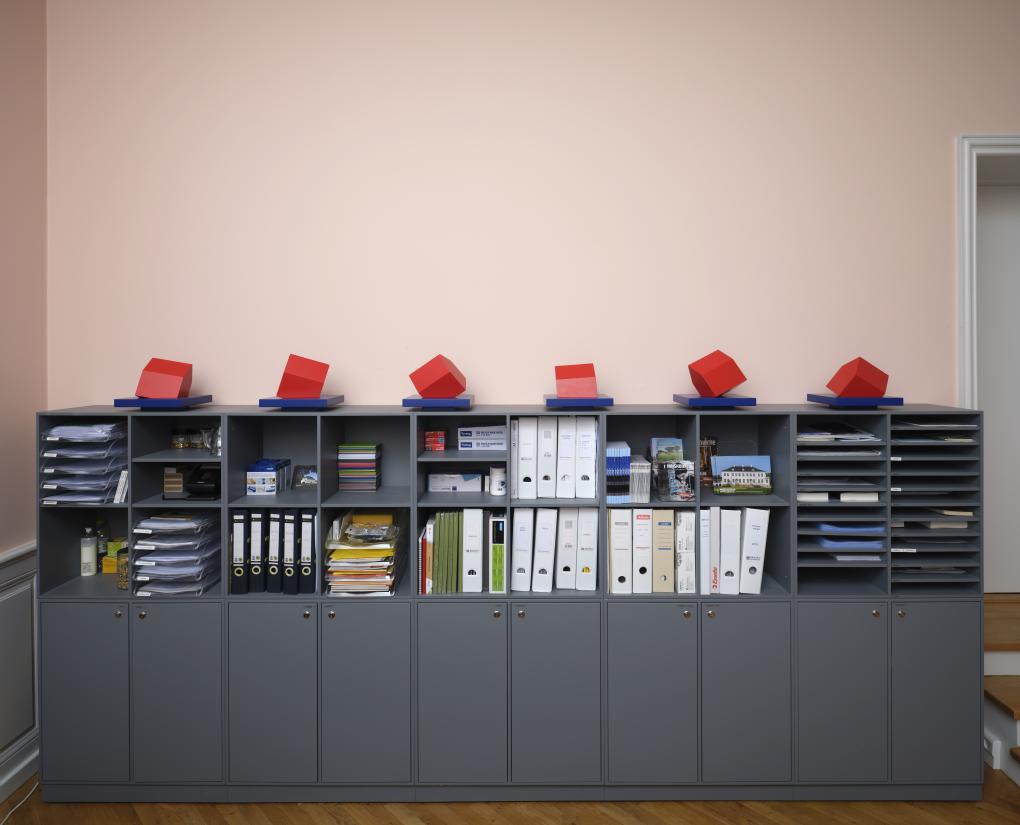 Krogerup Folk High School in Humlebæk in North Zealand is a modern institution of learning with democracy as its key focus. The school is based in a beautiful 18th-century manor house that was renovated and modernized in connection with the school’s 75th anniversary.

In a process that balanced respect for the architectural heritage with the need for modernization, the renovation brought Krogerup’s halls up to date. It was accompanied by a comprehensive decorative project carried out with support from the New Carlsberg Foundation.

The art in the school’s dining halls, corridors and offices invites the wider world in and addresses such topics as identity, climate and community in both direct and indirect ways. By twisting the representation of the familiar and commonplace, the art also – like the school itself – encourages reflection and engagement with other potential realities.

The Swedish visual artist Anna Bjerger’s large panoramic natural scenery is both simple and enigmatic. Something that is simultaneously safe and disturbing is at play in the dark forested landscape, devoid of human beings, where time seems heavy and meditatively motionless. In her practice, Bjerger deliberately uses images that contain familiar yet anonymous features that may serve as projection surfaces for memories and reflection to any observer. The scale of the painting further supports the sense of a space the viewer might enter into. Finally, the pieces offers a new approach to Nordic landscape art that might inspire conversations about the representation of melancholy and identity in a Scandinavian context.

Arriving at Krogerup through the main entrance, one is welcomed by the school’s main office. The office is the heart of the school and now has a display of art that matches the room’s distinctive architecture and beautiful interior. Kaspar Bonnén’s Looking For Now is imbued with a poetic-magical everyday realism that resonates with the atmosphere at Krogerup. The piece is a colourful dialogue between the recollected, the perceived and the partially forgotten. It portrays a dream-like universe, rich in associations, that offers an inexhaustible source of reflection to the many people who come to the office.

Kent Iwemyr has a particular affinity for people living outside the mainstream of society. Among the figures in this five-piece series from 2020 are an unusually large moose grazing in a lake, two misunderstood thieves and an elderly man pondering his unrealized dream of participating in the annual Lucia procession. The scenes and figures are all drawn from the region of Hallsthammer in northern Sweden, where the artist grew up and still lives and works today. Despite its idyllic countryside appeal and Iwemyr’s characteristic humorous expression, his art has an unsentimental air due to its radical openness. Iwemyr demonstrates how familiar everyday comedy co-exists with tragedy and how the mundane meets the magical.

The American artist Monica Kim Garza’s bar scene has an immediate, empathic and personal appeal. The Bar Is Open was created during the social isolation of the Covid pandemic. The brushstrokes are loose, the colours saturated and close, as if they are seeking to crystallize lived moments in a wistful longing for social spaces and interactions. The four figures are modelled on Garza’s own body. In the painting, they are shown gathered around a bar, smoking and drinking, naked and happy against a vibrant green background. At the same time, each figure has her own orientation in the room. This socially distanced interaction suggests the nuanced feelings of community that arise in collective experiences of body and space and their mutual relationships.

Morten Schelde’s Ocean Of Time XIII (Asleep At Sea) was created for the artist’s most recent exhibition at Faaborg Museum (2020). The exhibition was based on historical interior pictures where domestic settings meet the unpredictability of dreams. In Ocean Of Time XIII (Asleep At Sea), Schelde invites us to reconsider the relationships between ideas, dreams and reality. The picture shows a sleeping ship’s passenger whose duvet has become the open sea, where small boats and the people they carry navigate the simultaneously delimited and fluid space of the cabin.

In a nod to painter Johannes Larsen, since 2017, Svend-Allan Sørensen has been working on a series titled Absurd Birds consisting of 11 woodcuts that have not previously been exhibited. The woodcuts are based on old American illustrations of birds. These original illustrations were scanned in a high resolution, then printed and finally rescanned in a process resulting in crooked and blurred images. These absurd representations of birds challenge the viewer’s anticipations by playing with and distorting classic depictions.

‘The woodcuts have a simultaneously concrete and absurd appearance, a serious note in a crazy time. In order to see the real world, sometimes we may have to tweak its depiction. That is the main concept behind Absurd Birds,’ says Sørensen.

Per Arnoldi’s minimalist sculpture series Global Warming is instantly decoded as variations on a house that is sinking into the sea. The sculptures have Arnoldi’s characteristic bright colour signature, here in red and blue, and come across as art, symbol and climate comment rolled into one. 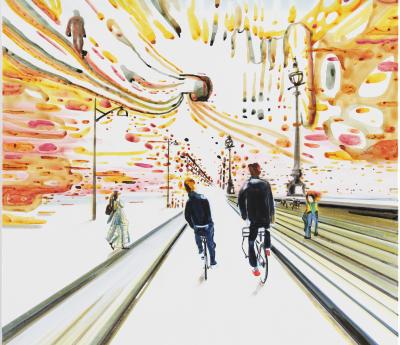 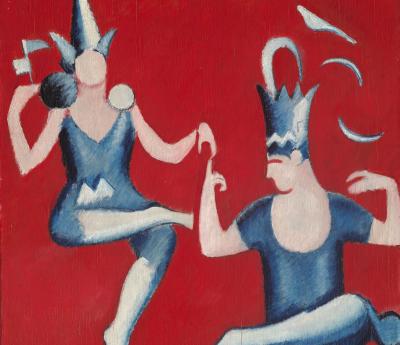 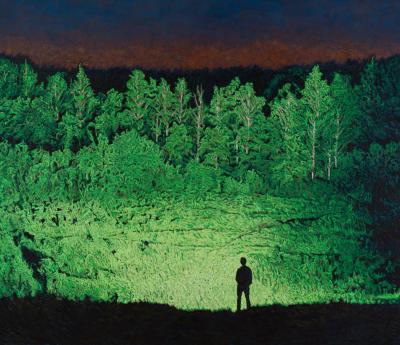 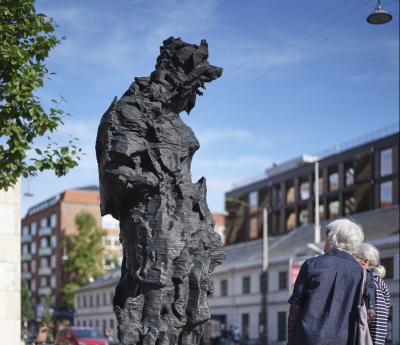