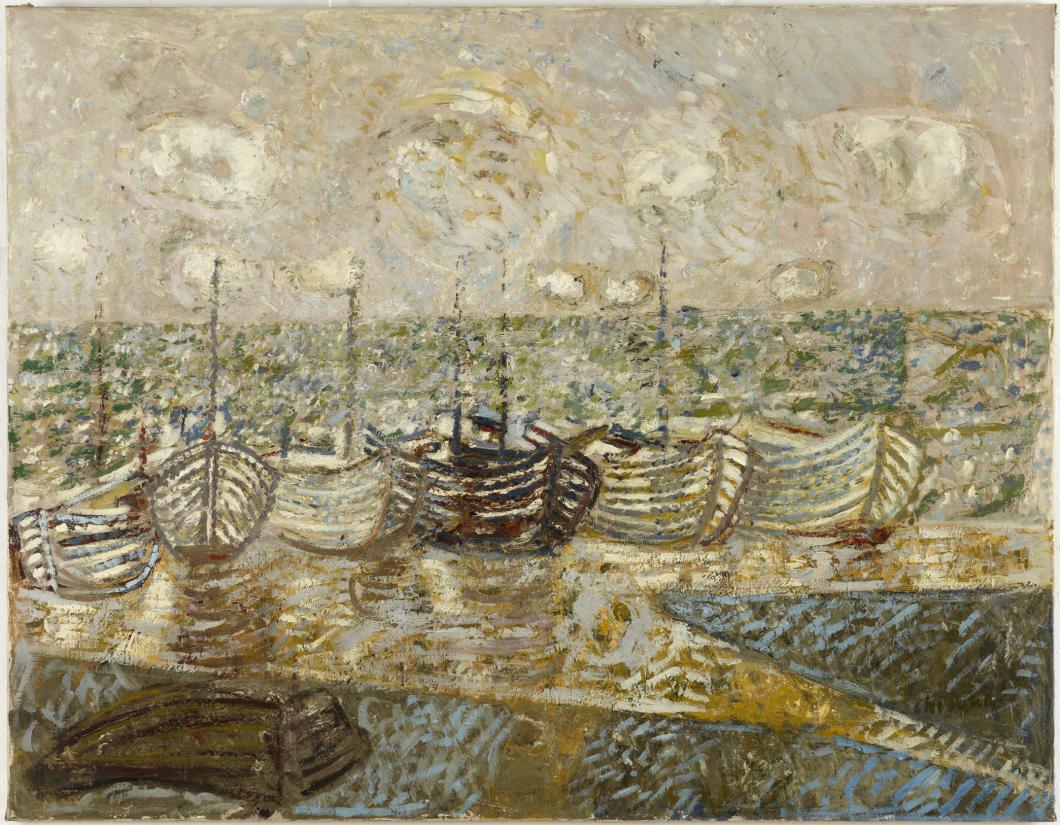 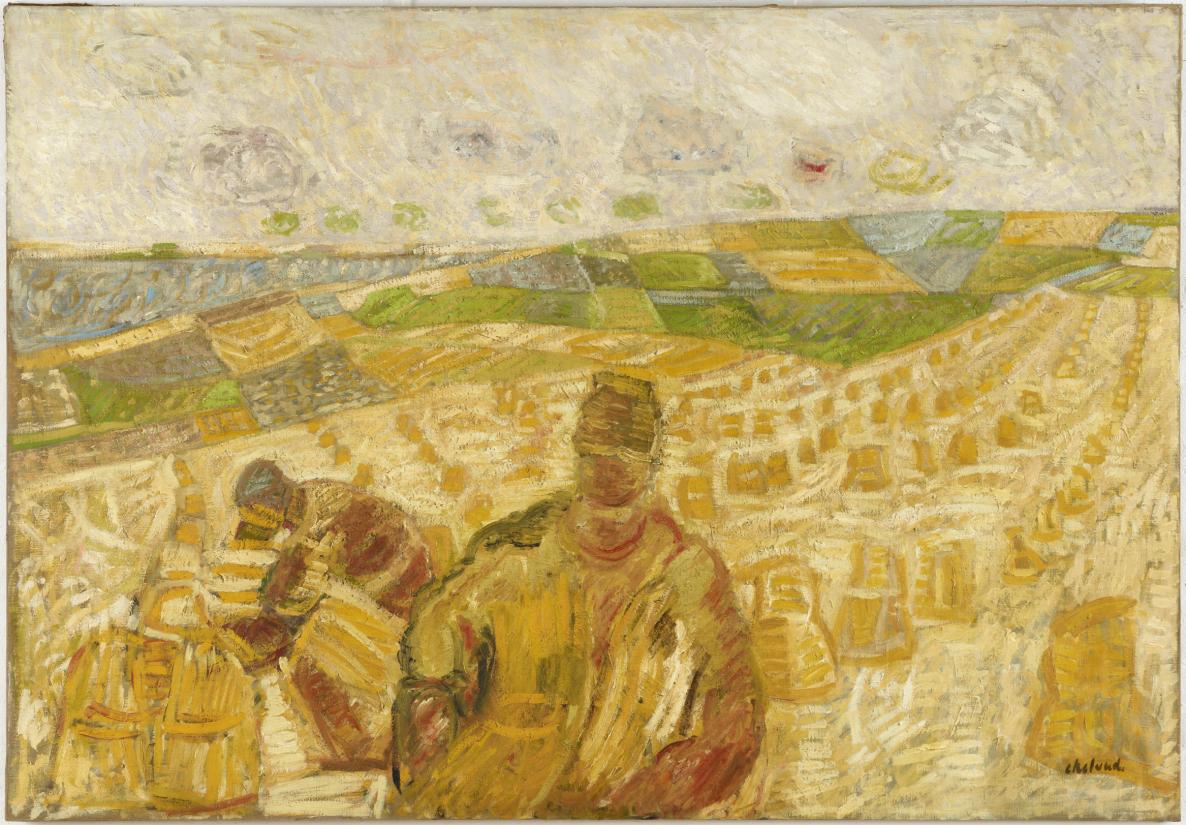 Høstlandskab and Både på stranden, both dating from 1965, portray the scenery in northern Jutland that captured Poul Ekelund’s fascination during the latter half of his career. Both paintings were very likely created in the town of Vangså, where Ekelund bought a summer cottage in 1961.

To Ekelund, naturalism was not about creating lifelike reproductions of what he saw. Instead, reality had to be present in the art, and that meant nature and people. The interaction between man and nature was one of Ekelund’s key themes. Many of his paintings challenge the notion of nature as passive and subordinate to human whims and instead portray a symbiotic relationship. One example of this is Høstlandskab, where nature and humans become one, as the two women workers become part of nature’s colour scale. The horizon is high, and even though the two workers are placed in the foreground and account for a large part of the image, behind them nature unfolds in all its grandeur, reminding us of the true relationship of scale.

This symbiosis is also portrayed in Både på stranden, where the colours and the pointillist technique blur the boundaries between boats, sea and beach. The quick, abrupt brushstrokes are balanced by the harmonious natural colours.

Ekelund often painted the same image over and over in series portraying boats on the beach or field landscapes constructed of colour patches. In addition to repeatedly revisiting the same scenes, he also applied this serial aspect to the individual images. The boats lined up side by side, the clouds floating like four full stops in the sky, the sheaves of corn arranged systematically in the field and the trees lining the avenue running along the horizon. This repetition gives rise to a sense of rhythm and calming order in works that are otherwise characterized by a fleeting impressionistic quality.

The exhibition at Vendsyssel Kunstmuseum is accompanied by a research anthology with contributions from Henning Jørgensen, Kirsten Tange Maagaard and Mikael Wivel. The authors delve into the current relevance of the paintings and shed light on new sides of Ekelund. For example, his interest in the relationship between humanity and nature is more relevant than ever, in light of the current debate about climate and our impact on it.

Poul Ekelund (1921–1976) grew up in Copenhagen and later moved to the of the village of Mønge in North Zealand with his wife, Birthe. Among their circle of friends were the artists Ejler Bille, Harald Leth and Anna and Erik Thommesen. Despite their different expressions, Ekelund was inspired by his fellow artists and enjoyed the mutual bond they shared. Later he was involving in founding Martsudstillingen (The March Exhibition), which grew into a significant artist association that was active for more than three decades. Towards the end of his life and career, he spent his summers in North Jutland, where he found nature to be more undisturbed. During these later years, his style matured, and many of his best-known paintings were created in the middle of nature in North Jutland. 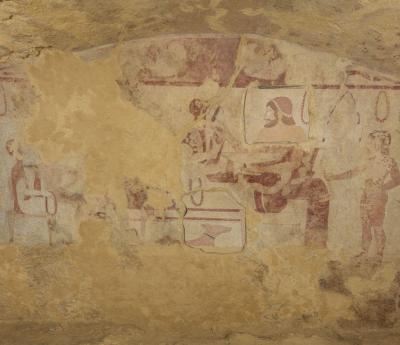 The painted Etruscan tombs in Tarquinia, north of Rome, offer detailed insight into life and death in this ancient pre-Roman culture. After extensive restoration, the more than 2,600-year-old Etruscan frescoes in the Tomb of the Painted Vases have now re-emerged. The restoration was carried out with support from the New Carlsberg Foundation. 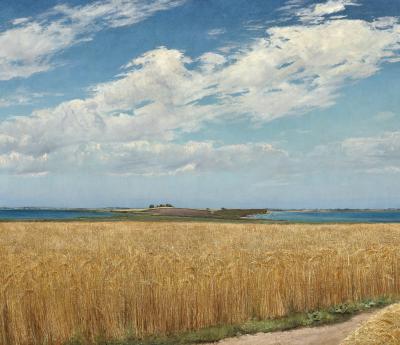 With chiselled clarity and crisp colours, L. A. Ring portrays summer living on the Danish island of Enø. The only boundary between the contrasting colours of ripe corn and the clear blue sky is a narrow strip of sea and the family’s cherished summer carriage, which allowed Ring to immerse himself in the landscapes he painted. Now, the public can see the bright landscape painting at Ribe Art Museum, which recently acquired it at auction with support from the New Carlsberg Foundation. 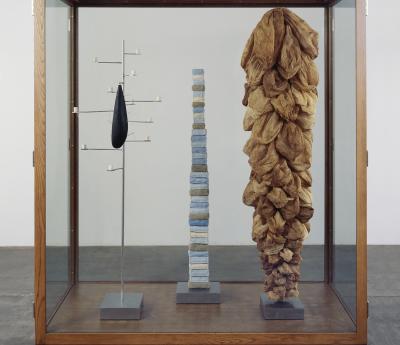 Louisiana adds another powerful and personal work of art by Louise Bourgeois to its collection. The new acquisition, which was made possible by support from the New Carlsberg Foundation, exemplifies how Bourgeois draws strength from her traumas by giving them sculptural form.

Hito Steyerl to Kunsten in Aalborg 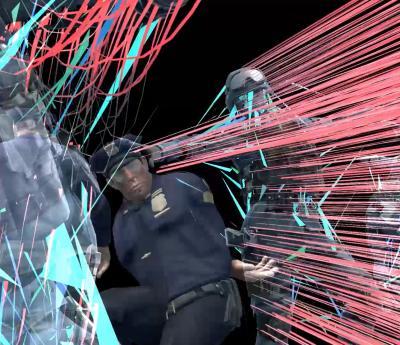 Important video installation by the German contemporary artist and theorist Hito Steyerl has now been added to the permanent collection of Kunsten Museum of Modern Art in Aalborg. With computer game aesthetics, humour and impactful sensory qualities, SocialSim examines serious topics, such as police violence and social conformity and regimentation. The acquisition was made possible by a grant from the New Carlsberg Foundation.